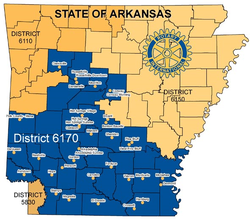 Rotary's story is an important one, and our community is proud to have been a part of the organization's long history of service.

The move toward organizing a Rotary Club in Arkadelphia began early in 1919. The nation was not only in the throes of World War I, but suffering from a major flu epidemic, Three men -- attorney Joe Callaway, Siftings Herald editor Phil McCorkle, and one other whose name is not known -- met at the Caddo Hotel primarily to organize to fight the flu. The Rotary Club, which at that time was growing popular in other parts of the nation, came up for discussion by these "three musketeers." They felt that a Rotary Club would be good for Arkadelphia, so there were other meetings to plan the organization of a club. The men learned that the Rotary motto is "Service Above Self," that its purpose was the general improvement of the community, and not to advance the welfare of a favored few who were to become charter members. The common denominator was and is "The Golden Rule."

Besides merchant, banker, doctor, and editor, the industrialist was deemed paramount to the success of the organization, as were educators. Community leaders such as Noel Adams, then manager of the very prosperous Arkadelphia Milling company; Duncan Brown, manager of the Temple Cotton Oil Company; Van Wright, lumber dealer; Tracy Rudolph, a hardware store owner; Alva Harris, member of a furniture firm in the city; and others rounded out the classifications.

The organization's records show that the Arkadelphia Rotary Club was first organized on September 16, 1919, and that it was received into full affiliation with Rotary International November 1, 1919, the date of the issuance of the club's charter. The group's charter members were: Joe C. Callaway, Allen Frye, N. Van Wright, Arthur J. Vestal, Henry Allison, M.G. Ferguson, E.E. Nowlin, J.M. Daly, Philip McCorkle, Frank S. Finger, W. Floyd Whitten, Tom A. Tennyson, Tracy T. Rudolph, E.W. Thomas, Leslie Goodloe, W. Noel Adams, W.B. East, Duncan E. Brown, D. Frank Harris, Robert C. McDaniel, and Alva C. Harris. The charter officers were: W.N. Adams, president; Van Wright, vice president; Leslie Goodloe, treasurer; Duncan Brown, secretary; Joe Callaway, sergeant-at-arms, and Alva Harris. The original board of directors included: W.B. East, Tracy Rudolph, Alva Harris, M.G. Ferguson, and Henry Allison. Charter Night, in the dining room of the Caddo Hotel, was a memorable occasion. The charter members and their wives, known as Rotary Anns, were present and there was a sparkling program on tap. A Rotary Club has only one member representing each occupation in the community. There have been occasions when a special dispensation has allowed two of the same category. For example, at one time the presidents of Henderson College and Ouachita College were both in nomination. Rotary International was consulted; inasmuch as one was from a state school and the other from a church school, the governing body said both presidents were acceptable.

A charter member, Philip McCorkle, once recalled many of the worthwhile community projects in which the group took part or for which its leaders spearheaded drives. One of the very first acts of this kind was a city-wide Christmas gift, seeing that needy children in town got useful presents as well as the small toys that make children happy at Christmas. Boy Scouting was another example: the Rotary Club once sponsored a troop in Arkadelphia. Also, several years ago, the water system needed revamping, at a time when municipal funds were low. The primary need was a filter, which cost several thousand dollars. The Rotary Club contributed $500 to the project in addition to giving a personal and collective support to the city. Rotary was also a leader in the move to initiate street paving in Arkadelphia. The Arkadelphia Rotary Club has made contributions of money and influence in such causes as the hospital for crippled children at Memphis. When the Methodist of the state voted to consolidate its higher educational institutions, this put Henderson at Arkadelphia and Galloway of Searcy out of business, leaving Hendrix at Conway. Arkadelphia was faced with the loss of one of its primary economic assets and cultural institutions. The Rotary Club supported the Chamber of Commerce and other groups in getting the State of Arkansas to assume control of Henderson. They worked heroically to get the bill through the legislature. Rotary and Rotarians have also always been effective in assisting Ouachita Baptist University in times of economic shortfalls. The Arkadelphia Rotary Club stands high among other Rotary Clubs in the state. It often engages in interclub meetings in its district. It has provided skits and acts at district get-togethers. A former local president, Cecil Cupp, Sr., was elected District Governor in 1953, and served with distinction. Another former president, Don Phillips, was elected District Governor in 1970 and in 1991, Dolph Whitten was elected District Governor. Jane Lucas was elected District Governor elect in 1995. In successive years 1993 and 1994, Arkadelphia had two members, Wesley Kluck and then Jane Lucas, named as the "Rotarian of the Year" for District 6170.

The club celebrated its fiftieth anniversary on November 14, 1969. The Rotary News offered congratulations to Jimmy Hobgood and John M. Moore for the splendid Golden Anniversary Program. Jimmy made a very impressive presentation of the club's half century of achievement. "Bugs" Moore ably presented a fifty-year plaque to Phil McCorkle, Sr. for his outstanding service to the club during this fifty year period and as the only living charter member. W.H. Haliburton was recognized for his twenty years of service as reporter, and for his keen interest in Rotary over this half century. Also, in 1969, the Arkadelphia Rotary Club gave every necessary assistance in furthering the major project of Chamber of Commerce, the promotion of the 59-million dollar DeGray Reservoir project on the Caddo River north of Arkadelphia. The club also aided the community in getting the two million dollar Arkadelphia Unit of the Arkansas Children's Colony.

In 1976, the club started a summer student exchange in which high school students were exchanged with clubs and districts in France, Netherlands, and Finland. This involved three to six students each year who arrived in July to spend about one month with families. In turn, the local organization sent local students to these foreign countries for the same period of time. The program was very successful, but discontinued in 1988 due to a lack of local host families. This program was resumed on a limited basis in the mid-nineties with Rotary districts in Germany. In 1978, the club began an organized effort to encourage members to contribute to the Rotary Foundation, it was called "The Paul Harris Group" and participants were systematically awarded The Paul Harris Fellow. As of 1998, the club had approximately eighty-seven members and others who have become Paul Harris Fellows. The Arkadelphia club has been especially active and successful in sponsoring winning applicants for Rotary International Ambassadorial Scholarships. These generous scholarships allow deserving college students to study for one year abroad, usually at the graduate level, while simultaneously serving as international goodwill ambassadors for our club, district, state, and nation.

While these scholars have studied different subjects in different countries, they all agree that their Rotary Ambassadorial Scholarship year has had a positive, life-altering impact on their lives. It has been rewarding for our club to have played a part in affording these fine young scholars this opportunity. In 1974, the Arkadelphia Rotary Club participated with other clubs in the district in the first Group Study Exchange. The initial exchange was with a district in New Zealand. As a result of its success, the organization subsequently participated in exchanges with districts from Brazil, India, Germany, France, Philippines, Australia, Argentina, New Zealand, Bangladesh, Japan, and Colombia.

In 1985, the Rotary Club resumed the program of furnishing Christmas food baskets to needy families. Each year, twenty-five to thirty baskets have been delivered several days before Christmas. In the past few years, Rotary has also given financial support to the Christmas Store. In 1985, Arkadelphia Rotary Club contributed $35,000 to the Polio Plus Campaign.

On November 1,1994, the 75th anniversary of the Arkadelphia Club was celebrated with a banquet. Among the special activities were letters from Arkansas Governor Jim Guy Tucker, Arkadelphia Mayor Kitty Holland, and President Bill Clinton. Other remarks were made by the Rotary District Governor of District 6170 as well as a certificate from the President of Rotary International. Among the presentations that night was a $7,500 gift to the newly formed Arkadelphia Boys and Girls Club. For several years in the mid-90s, Arkadelphia Rotary, along with help from the Ross Foundation, sponsored the Close-Up Program for high school juniors to experience government first-hand in Washington, D.C.

Over the years, the club awarded monetary scholarships to high school students, made awards to outstanding college students, awarded business of the year and volunteer of the year, contributed to Boy Scouts, Girl Scouts, Little League, United Way, and certain other worthwhile programs. In 1989, the club assumed the litter clean-up responsibility of a one-mile section of Highway 67 North. In April 1997, the club planted a tree on Main between 7th and 8th Street in observation of the 50th Anniversary of the death of Paul Harris. In 2001-02, the Rotary Club provided a brace for a Goza Middle School Mexican student, donated $500 to the Girl Scout Hut restoration fund, $1,000 to the Angel Tree, sponsored a high school student from Brazil, donated to SUNSATIONAL SUMMER, PERRITT DRUG WALK, and the ARKANSAS BULLS basketball team, provided four scholarships to AHS students and sponsored a student at Girls/Boys' States. Amy Nichols was named District 6170 "Rotarian of the Year," Club Service received the district award, our foundation goal of $5,376 was met, and Rotary Club was presented the "People's Choice" award in the Clark County Daily Siftings Herald competition. EARLY ACT Clubs were started in the three elementary schools - Perritt, Central, and Peake. The Arkadelphia Rotary Club has found that living up to the motto "Service Above Self” has always paid dividends and provides the membership with the opportunity to be of service to others and the community.
Can you contribute to the history of the Arkadelphia Rotary Club?
Contact us!